Space exploration and travelling to The Moon and Mars, was the topic of world space week in 2017, and also the 2019-year theme will be “The Moon: Gateway to the stars”. Furthermore, the space society’s approach to using cubesats and the KNTU student cubesat team Nasir-1’s participating in student Iranian cube competition from ISA, were the starting point to formation of this thesis idea “Lunar Mission Design with a cubesat”. Thesis Submitted in Partial Fulfillment of the Requirements for the Degree of Master of Science (M.Sc.) in Aerospace Structures Engineering.

The presentation session of this thesis was held on 12th of September 2018 in KNTU, with the presence of supervisor of thesis, Dr. Mirshams, and the chairmen Dr. Jafari Nadushan and Dr. Naseh. The provider of this thesis was Engineer Mrs. Zahra Hoodan. In this thesis, the idea of having a mission to Moon using a cubesat and the process of mission design according to the defined steps, is presented. This process starts with presenting the mission definition and describing the parts that forms a mission. The mission analysis consists of describing the lunar mission objectives and constraints and also the idea of using Iranian Launch Vehicle, considering the mass constraint of third stage. The mission objective is technology demonstration and sending practical signal from lunar orbit. By defining mission concept elements, the mission analysis starts by defining orbit transfer and designing lunar trajectory and also calculating delta velocity budget for orbit part. After estimating mass budget of launch vehicles` third stage, the payload mass and dimensions of cubesats are determined. A brief description of cubesat subsystems characteristics is proposed, namely cubesat concept. The verification of project is done with STK software in order to design transfer trajectory and implement trajectory scenario. 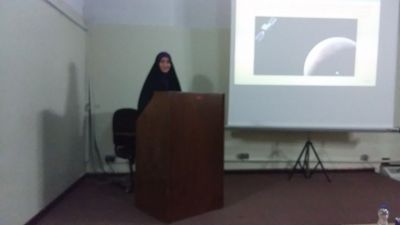